Given less than a year to live, 41-year-old Anneliese Sarjeant-Wickham has been fighting systemic Lupus for the past 8 years. During this battle, she went from being gainfully employed for over a decade at TSTT, to running her own business from home, full time with the aid of friends and family.

It all started with a single spot on her face, with more appearing on her arms. Seeking help, she was advised by her supervisor at the time to consult a dermatologist. Upon initial examination, her dermatologist suspected that her mysterious skin ailment might be Lupus and ordered several blood and skin tests to evaluate it further.

Sarjeant-Wickham initially confused her diagnosis with another disease.  “I never heard about Lupus before. When she said it might be Lupus, I thought she meant Leprosy from the Bible and I freaked out.”, she said. Her doctor advised her not to be alarmed as it was only an initial diagnosis and so she returned to work as usual.

A month later, her dermatologist’s suspicions were confirmed when test results returned with horrifying news, she had tested positive for Lupus. But this was not the only news that she got during that time, along with her diagnosis, Sarjeant-Wickham found out that she was also pregnant.

Her diagnosis meant that she now required chemotherapy treatment and it was during this time that she was informed that her baby would die as a result of the treatment. She describes it as the darkest stage of her life.

“When I found out I had Lupus I thought for sure that it was death sentence. I didn’t know how to accept it, how to react to it, everything I read just promoted doom and gloom.” said Sarjeant-Wickham.

But, despite what the doctors said, her baby did not die during the chemotherapy and Sarjeant-Wickham carried the baby to term.

She spent most of her pregnancy in the company of her stepmother and father. Her stepmother, Ursula, stuck with her throughout the pregnancy and continued to help her after the child was born.

As her illness progressed, Sarjeant-Wickham struggled with the ongoing changes in her body. Changes that made it difficult for her to do the smallest of things. She became despondent about her future and remained distant from her newborn baby.

“I never bathed or fed her, my stepmother would hold her on my breast because I didn’t want any part of that baby, I was ready to die.”

As the disease started to take its toll on her, Sarjeant-Wickham found it difficult to adjust to changes in her weight and her diet. She gained weight as a side effect of the prescribed steroid medication, but this weight gain was short lived as her symptoms suddenly became worse due to side effects of her treatment. Hair loss, kidney failure and chronic joint pains were just some of the medication’s adverse side effects that she experienced.

By this time, she found it increasingly difficult to work and after 13 years of service at the telecommunications giant, Sarjeant-Wickham tendered her resignation. However, she refused to allow her illness to leave her bedridden and decided to try running her own business in order to cover her increasingly expensive medical bills.

She pursued treatment in the United States under the Obamacare programme which allowed for different medications to be used to treat the disease, ones not available in Trinidad & Tobago. However, these medications were not without their own serious side effects. Sarjeant-Wickham noted that there was an increase in vision problems, development of a deformed shoulder and hip problems which required surgery. She stated that while the new medication did help ease the symptoms for Lupus for a little bit, it came at a great cost to her.

Through all her trials and tribulations, Sarjeant-Wickham still somehow finds the time and strength to continue the charity work that she did across Trinidad & Tobago as a healthy young adult.  She said that she will not allow her current condition to prevent her from helping others.

Sarjeant-Wickham is concerned that Trinidad & Tobago’s healthcare system is not prepared to deal with patients suffering from the disease as there are only two doctors in the field locally. These doctors are Dr. H. Dayanand and Dr. Peter Poon-King.

She is also a member of the “The Voice of Lupus Foundation”, an organization that was formed to inform and educate the public on the disease, as well as to provide support to those living with Lupus. It was founded by Reeanna Harrilal, who also suffers from the chronic disease.

Determined to go as far as she can, Sarjeant-Wickham wants persons struggling with Lupus to know that it’s not a death sentence and that the fear of death is worse than death itself.

“You can live a normal life with Lupus.  You have to follow your diet, exercise and find someone to talk to. That support is everything, especially when you feel like giving up every other day when the pain hits.

Having this illness has brought a better an appreciation of life to me, I cherish the little things, I try to spend more time with my family, my kids and the people that matter in my life.”

For more information on Lupus, you can visit the Facebook page The Voice of Lupus or visit their office in San Fernando, phone 868-328-0220 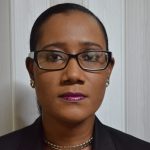