Anil Waithe is a long-time resident of Dinsley Village, Tacarigua and is even considered to be the local treasure of the village. Visually impaired from birth, Waithe has always made the best of whatever opportunity came his way.

His mother, Sandra Waithe, made sure to provide whatever her son needed despite his condition. She inspired, encouraged and motivated him to push through whatever walls appeared in his life and to always be “ever upward, ever forward.”

Before starting his integration into the education system, Waithe attended the School for the Blind, located in Santa Cruz. He described his time there as less than pleasant.

“The people I had for teachers were more demotivational than motivational because they would always say that I was a stupid failure and wouldn’t amount to anything life.”

Nevertheless, Waithe persevered and after learning the Braille system in just under six months, he left the institution to enroll and attend the Tacarigua Presbyterian School where he went on to become one of the school’s top students in his time there.

Always diligent at heart, Waithe had to put up with students harassing him all the time and teachers not having the proper resources or training to facilitate a student like him. Despite this, he graduated after successfully completing the Common Entrance examination, entering Hillview College where he stayed until he graduated in August of 2007. Upon graduation, Waithe was given a Compaq Presario desktop computer as a gift from the W. R. Torres Foundation for the Blind.

“It wasn’t that great of a computer, but I made do with it. It had a rusted casing; the hard drive was smaller than a standard DVD at that time; and it had so many problems on both the inside and the outside. The power button was missing so I had to use a nail to boot-up and load the operating system.”

Nevertheless, Waithe accepted his gift and made the best of the circumstances. During his off-time one day, he started tinkering with the unit, listening to the sounds of the operating system during start up and shutdown, feeling the gears and the cables inside the Central Processing Unit’s shell. Within a small amount of time, he was doing his own repairs on the system. It was at this time that Waithe had a moment of clarity and realized what he wanted to pursue – Computer Technology.

After graduating at the top of his class with multiple distinctions, Waithe developed a second lifelong goal; he wanted to be a pioneer and achieve the highest level of education he could attain to prove that even though he was born without one of his senses – he was still a human being that “sought to climb the highest mountain like everyone else.” After successfully completing his Advanced Level in 2007, Waithe moved on to enter the University of the West Indies {UWI} to further his studies in the field of Information Technology and Computer Science.

By the time he had completed his B.Sc. in Information Technology in 2012, Waithe had opened up a private practice computer repair shop at his home to help fuel his passion. Immediately afterward, Waithe enrolled in a M.Sc. programme in Computer Science, once again defying all expectations of someone of his background. In November of 2018, Anil Waithe became the first “totally blind” person to graduate with a M.Sc. in Computer Science in the Caribbean. Still “ever upward ever forward,” Waithe has dreams of one day achieving his Doctorate.

Presently, Waithe is teaching two online courses entitled, “An Introduction to Windows 8 & Windows 10” and “Android Application Development” which he hopes can benefit other blind students by reducing the accessibility barrier there by stimulating integration among the sighted and sightless society.

Since his time at UWI, Waithe has come to love his craft and anything to do with “technology that benefits the many instead of the few.” Currently, he is working on plethora of projects with the aim of improving the independency of his fellow visually impaired brethren that include but are not limited to:

A “Digital Equality” project entitled: “No One Left Behind.” 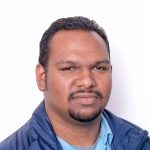